by Alexander Thomas (aka Dr. Lex)

This is a custom Android 4.2.2 ROM image for the Abardeen F80 watch phone. It completely replaces the stock ROM with a new system that includes many more languages, as well as built-in support for the Play store and other Google applications. It also includes many fixes that improve overall usability. This ROM effectively turns the F80 into a tiny full-featured smartphone. It was created by combining core system files from the stock ROM with the application layer of another ROM that was custom-made by Dees_Troy for the Omate TrueSmart (see below for more details), hence the name ‘FrankenROM’ as a reference to Frankenstein. 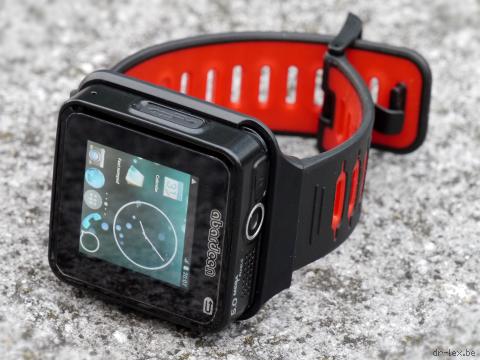 This is version FR4, which contains a few important improvements compared to the previous version, and which should be easier to flash. People who have not yet installed previous version FR3, must flash the ROM through a PC, using SP Flash Tool in Windows. Instructions are included in the README file. People who are already using FR3, can install an update package.

On 2015/06/18, I re-packaged the ROM with files that allow to select between three different partitioning lay-outs, see below.

Obviously, this ROM is provided without any warranties. Flashing and using it is entirely at your own risk. I do not promise to give any support for this ROM, but if you ask nicely, I might help you out. You may also find help in the F80 XDA forum thread.

Before downloading and installing this ROM, check if your F80 has a valid IMEI and if yes, write it down. Flashing this ROM will reset your IMEI to a default value. See the caveats for a workaround.

I don't really like requiring people to use SP Flash Tool because it is not easy to use and there is a risk of bricking your phone. It is however the only option due to differences in firmware lay-out. If you don't know this program or do not know some of its functions, stick to the instructions in the README file only. Do not try to use anything else. Do not try to format the NAND starting at the 0x0 address. Do not try to use the test functions. And do not try to erase the preloader unless you know exactly what you are doing.

Be sure to check out the section about recommended apps in the F80 review after installing the ROM.

You do not need this upgrade if you install the ROM above. This is only useful for users who are running the previous FR3 version of this ROM and do not want to reinstall from scratch. You can check what version you currently have by going to System Settings → ‘About phone’ → ‘Build number’: if the number ends in “FR3,” then you can upgrade by following these steps:

You can also easily flash the image from a PC that has ADB installed, by sideloading it. In TWRP recovery, go to Advanced → ‘ADB Sideload’. Then slide, connect the phone through USB, and execute “adb sideload [file.zip]” on your PC.

This package will only install on a FrankenROM version FR3. It includes the updated audio settings introduced in FR4.

This ROM has no unified storage, instead it still has the annoying fixed-size ‘Internal’ and ‘Phone’ storage. Apps can only be installed to Internal storage. The original ROM and first versions of this FrankenROM only have 1 GiB for apps, which is quite tight and will easily cause the dreaded ‘Insufficient storage available’ message. This is why since 2015/06/18, the download comes with files that allow to choose between three configurations:

See the README file for instructions how to select a certain configuration before flashing, and how to re-partition your F80 without losing your apps.

Quite a bit of effort went into porting this ROM. If you use it, like it, and want to show your gratitude, a small donation

(through PayPal or BitCoin/Litecoin/Ethereum) is always appreciated.

Flashing the entire ROM will reset the IMEI. I don't think my F80 ever had a valid IMEI to start with, but if yours has, you should write it down before flashing, and re-set it afterwards. Having a valid IMEI is not crucial in most countries, but it is good to have one. If your F80 lacks a valid IMEI but you still have an old phone lying around that you never use anymore, you can recycle its IMEI.

One way to set the IMEI inside the phone itself, is as follows:

The FrankenROM still has a few minor problems. The most obvious one is the “Slot 2: No SIM card detected” warning that shows up at every boot. I have tried hard to get rid of it in a fundamental manner, but I only got boot-loops as a result. The warning can be automatically hidden by installing the XPosed NotifyClean module, which gets rid of the warning easily (XPosed is not included in the FrankenROM, see the F80 review page for more info).

Another small problem is that the charge indicator tends to lag behind, both when charging and using the phone. I suspect this is because the original ROM was configured for a larger battery. This means it tends to be pessimistic after charging, and optimistic when discharging. Especially if the battery has been discharging very slowly, the low battery warning is not even shown before the phone shuts down. Remember to recharge when the indicator drops below 25%. If your F80 is still running after two and a half days, it is high time to recharge it no matter what the indicator says.

Finally, it would be a lot better to have unified storage than a fixed partitioning scheme. However, concrete information on how to make this work is nowehere to be found, and it seems far from trivial, so for now you'll have to do with the three partitioning options offered.

Should the phone ever end up in a weird state or become unresponsive, just force a shutdown by holding down the power button for 8 seconds, and it should return to normal.

A short list of all the modifications compared to Dees_Troy's original ROM:

I kept the Nova launcher that came with Dees' ROM, because it is indeed a pretty good launcher for a tiny screen like this. I recommend paying the extremely reasonable fee for the Prime version, which has a few extras like the ability to tweak icon sizes.

I provide this ROM without any warranties. Using it is entirely at your own risk. The ROM or any subparts may not be sold for profit. Modified versions may be distributed if the original copyright messages and a link to this page are included.
This ROM must not be used for any application that concerns life support, or is otherwise related to medical, industrial, financial, aerospace, or military applications. Or in layman's terms: this ROM is a hobby project and as its name implies, it was patched together by collecting parts from other ROMs and modifying decompiled APKs. Security was not a concern while making this ROM. Using it for anything critical would be unwise to say the least, and would be entirely at the responsibility of the user.